There’s a particularly nasty implementation detail that doesn’t seem to come up often but is just waiting to bite just about every Mac user in the ass. Mail.app allows users to attach files inline allowing them to be part of the flow of the text or in the case of one of my users be right alongside the paragraph talking about the changes in that paragraph. Or like me, right below the email you’re sending and above the replied emails because of Mail.app’s defaulting to top posting. The issue isn’t being able to put attachments inline, but the fact that by default Mail.app will encode the attachment in the same spot in the email file causing other email clients to see the rest of the email as a set of attachments.

The fix: Make sure “Always Insert Attachments at End of Message” is checked off (preference key is AttachAtEnd - boolean for you MCX minded folk) and you can now attach inline as you would normally want to without having Outlook eat your message.

Thunderbird will display the text correctly, but you’ll lose it and it will only appear as an attachment once that email is forwarded or replied to: (Part 1.1.3 is the text “There’s an attachment”). You’ll also notice the horizontal rule separating between the different HTML portions of the email. 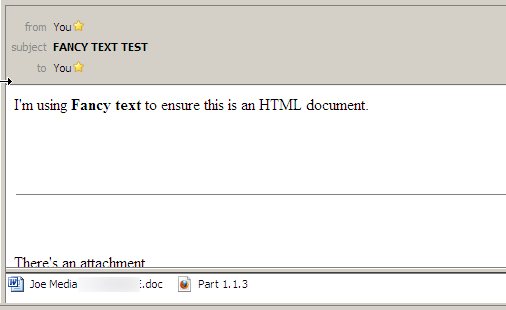 What program completely falls flat on it’s face is Outlook; it just puts all attachments off to the side and you have no idea what’s in the those ATT documents and your client sure as hell isn’t going to read them. So you’ve sent the email, the email was successfully sent, the text will be visible on their webmail systems, on their mobile device (Blackberry or iPhone), and even visible in other mail clients but because it’s technically an attachment Outlook won’t display it inline by default. (For the same reason they won’t show images by default in emails - the cookie tracking and that it’s a great attack vector)

Of note, this only occurs when sending from Mail.app. Outlook can attach items inline and have no issue as it attaches the images at the end of the email.